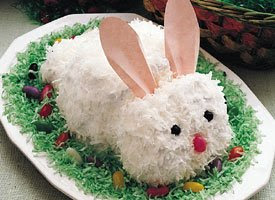 this was my brother and my favorite when we were kids.

1. Heat oven to 350°F (325°F for dark or nonstick pans). Make and cool cake as directed on box for two 8-inch or 9-inch round pans.
2. Reserve 1 layer for another use or to make a second bunny. Cut 1 layer in half as shown in diagram. Put halves together with frosting to form body. Place cake upright on cut edge on tray.
3. Cut out a notch about one-third of the way up one end of body to form head (small end) as shown in diagram. Attach half of cutout piece from tail with toothpicks. Frost with remaining frosting, rounding body on sides. Sprinkle with 1 cup coconut. Cut ears from construction paper; press into notch on top. Use jelly beans for eyes and nose.
4. Shake 1 cup coconut and 3 drops food color in tightly covered jar until evenly tinted. Surround bunny with tinted coconut. Add additional jelly beans if desired. Store loosely covered.

Posted by QuiltNut Creations on 4/11/2009 08:23:00 AM
Email ThisBlogThis!Share to TwitterShare to FacebookShare to Pinterest
Labels: snack saturday

yummy, but the bunny looks so cute to be eaten. anyway, a happy easter to u