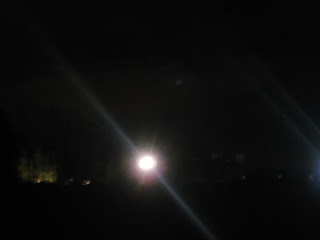 Yes, I am a Twilighter. And with filming for New Moon happening around Vancouver for the past 6 weeks, when some friends and I were given a tip where some filming was happening last night, we literally bolted for the car cameras in hand

Not to be discouraged, I reprogrammed our trusty GPS and off we went to find the other end of the street. While driving through what seemed like the middle of no where, Jill yelled that she could see lights. And WOW those lights were bright; and on cranes taller than the trees. We were in the general area, was this it?

And I have to make a comment here. When we got home last night, I popped my card into the computer to look at my 100+ pictures I shot and what do you think happened? My computer froze during downloading and not a single picture was saved. AHHHHHHH! So I've stolen these pictures from Jill and Cindy.

We hiked through a field(thankfully it wasn't a cow field so no *presents* left behind lol) We could see lots of trailers and more lights. And the best part??? We could hear wolves. Yes, wolveS-more than one. What we had read online before we headed to the set, the big break up scene between Bella/Edward was being filmed. Hearing the wolves literally sent chills up and down my spine. How many more days until the movie??(208 lol!!) 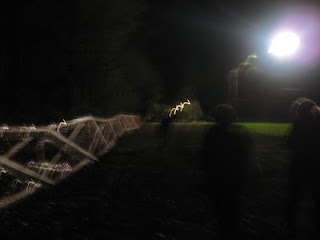 Than out of the bushes, mr security guard. He was polite, he told us it was a closed set. Couldn't say what they were filming and asked if we could leave. I debated about taking a picture of him and one of the all the trailers behind him but than a *very* cranky guy jumped out of the bush and told us that we were trespassing and could be arrested. I'm thinking he was a tad tired of chasing people away lol

So we did leave; but our plan was to find other fans. The location of the filming had been written up in this city's local paper on Friday; surely there was more people.

We drove to the next block to drive under where they were filming and the lights! I don't' understand why there weren't more people there taking pictures. We found the dirt road they had made to drag in all the trailers and equipment. I should point out that this house they were filming at, it was made just for the movie and it is a shell of a house. It was moved into this location during the week and filming is occurring there until the 30th. At least that is what the road closed sign told us lol.

Driving around the block, we did discover fans huddle on blankets patiently waiting. Apparently the security guard at that checkpoint was really mean, we didn't wander up to find out lol. We got talking to a TwilightDad, he drove his wife and daughter down from Kelowna for the weekend to see filming, how cool is that?? He said that they were able to drive past the house during the day so we might make a trip out there again during filming. I would love to see the house! 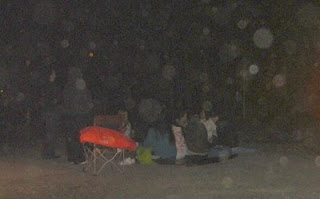 Posted by QuiltNut Creations on 4/25/2009 09:50:00 AM
Email ThisBlogThis!Share to TwitterShare to FacebookShare to Pinterest
Labels: me, twilight

p.s. oh and you lost ALL your pics.
omg...i would have died.

way to go Rhonda...now if the movie had Matthew McCaughnahey then I'd have driven for you and bulldozed the security guard...he's a rent a cop..what can he do? I guess now would be a bad time to mention that I have not yet read a Twilight book....not that I'm not intruigued.

LOL..I don't get the attraction of the books the guys or the movies ..but they were filming RIGHT by our house the other day/night..