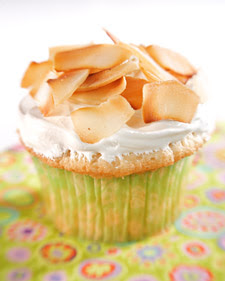 In the bowl of an electric mixer fitted with the paddle attachment, beat butter and 2 cups sugar until light and fluffy, 3 to 4 minutes, scraping down sides of the bowl as needed. Beat in vanilla. With mixer on low speed, add flour mixture in three parts, alternating with the milk and beginning and ending with the flour; beat until just combined. Transfer mixture to a large bowl; set aside.

In the clean bowl of an electric mixer fitted with the whisk attachment, beat egg whites on low speed until foamy. With mixer running, gradually add remaining 1/4 cup sugar; beat on high speed until stiff, glossy peaks form, about 4 minutes. Do not overbeat. Gently fold a third of the egg-white mixture into the butter-flour mixture until combined. Gently fold in remaining egg-white mixture; stir in shredded coconut.

Divide batter evenly among the muffin cups, filling each with a heaping 1/4 cup batter. Bake, rotating pans halfway through, until the cupcakes are golden brown and a cake tester inserted in the center of a cupcake comes out clean, 20 to 25 minutes. Transfer pans to a wire rack. Invert cupcakes onto rack; then reinvert and let cool completely, top sides up. Frost cupcakes swirling to cover. Cupcakes may be stored in a covered container in the refrigerator for up to 3 days. Garnish with fresh coconut just before serving.
Posted by QuiltNut Creations on 6/13/2009 08:58:00 AM
Email ThisBlogThis!Share to TwitterShare to FacebookShare to Pinterest
Labels: snack saturday

Good morning love the cupcake picture I took a bite out of my screen...ouch.... How do you do the you might like this story? nice touch..have a blessed day...lani

Ok not fair I just decided I was going on this CaveWoman Diet that I saw over at Lisa's blog...and now I see these wonderful cupcakes....oh no!!!!!

That end of the year fun really looks like fun...I know when my girls were in elementary school I would always volunteer to go on the end of the year outing...we had so much fun.....

These sound so yummy. Thanks for sharing. I'm going to make these this week!!! MMMMmmmm!