I finally started on my T-shirt quilt on the weekend. And just like everyone kept telling me, it was way easier than I thought once I got started.

I interfaced the wrong side of all the T-shirt fronts. I made the interfacing as big as I could before I started cutting. Than I cut them apart. That was stressful lol.

What amazed me was the T-shirt sizes. Some of the shirts were labeled Xlarge and yet they were smaller than the small T-shirts. Insane! I should mention, I didn't pick the t-shirts by size when I purchased them, I picked them because of the fronts. 1 I lucked out on when I discovered that the back had a logo too. 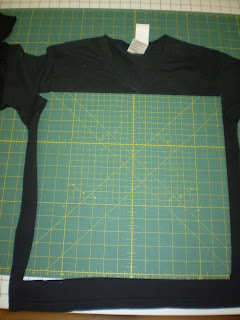 Two of the shirts were small enough that I ended up having to leave a little bit of the sleeve seam in the square. I don't think it's going to be noticeable. It was either that or lose some of the T-shirt front.

After cutting the shirts, I laid them out on the floor how I wanted them to go. Was happy to see that I could make each block the same width. But I made two rows 14inchs and one row 16 just to shake things up a little. 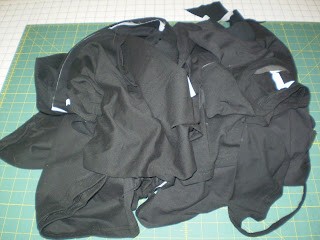 I started with the middle row, the 16inch wide one, and started fiddling with them to figure out how long the blocks should be. Once I settled on the size, I cut the blocks than sewed on some sashing strips. 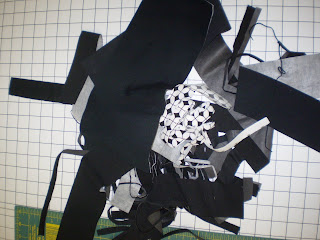 I did notice there is a lot of waste. I guess it really isn't waste when I cut the T-shirts so big originally. This is the pile after trimming all the blocks down to the correct size. I did end up running out of black interfacing so a few of them ended up with white. Hope that doesn't show through when I quilt it.

Here's the blocks at the start. And the only picture I'm going to show until it's finished. 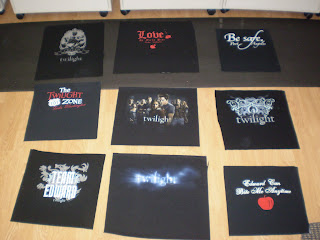 I did end up getting the rows sewn together as well. I just need to even up the sides than I can get the top sewn together. It's going together so well that I don't see a problem having it quilted next week. yay!
Posted by QuiltNut Creations on 11/05/2009 11:21:00 AM
Email ThisBlogThis!Share to TwitterShare to FacebookShare to Pinterest
Labels: quilting, tshirt quilt, twilight

Coming right along...I felt your frustration on the interfacing...but it turned out okay after all was said and done.

Rhonda - you make it sound so easy - when I did mine, I sweat bullets - but then I didn't have all my logos the same size and had to do a lot of figuring to put borders on each block to get them up to where they'd work. And I was so thankful that Quilted Cats agreed to do the quilting, because it was HUGE!!! Looking forward to seeing your end result.

{time for me to start being jealous.}