is it Friday yet? 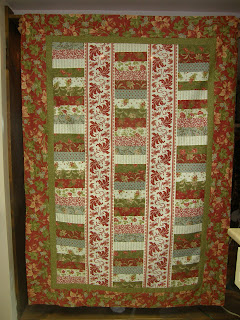 Monday we discovered the roof is leaking. Yesterday the front brakes in the van went. And today, my dryer died. Dead beyond dead died.

Good news? Jim can patch the roof; it's not a horrible leak so it's not that worrisome. Yet. We had the money to fix the brakes but now the emergency fund is empty. And my dad and Jim are fairly confident that between the two of them, they can repair the dryer.

With all that and spending much of my day glued to CNN to watch the horrific pictures from Haiti(we have family friends that were missionaries there for 23yrs. my dad has visited the country and we currently have sponsor children there) not much got accomplished today.

What I did accomplish? I finally got the borders on my New Year's Eve quilt. It's the Roman Holiday line from Moda. I got this quilt for Christmas I believe it was 2007; it may even have been 2006 lol. Ever since I did a customer's Roman Holiday quilt, I've been itching to get mine done. And here it is.

I made mine bigger(what else is new lol). I also had enough strips left over to make a section to put into the backing. At first I thought this could go on the wall but it's a little large so it will look lovely draped on my new favorite chair.

And just because he is so cute and literally spent all day on my sewing table, Gizmo. 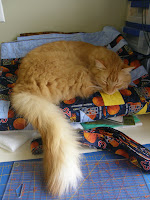 I loved Roman Holiday from Moda. I still have pieces in my stash that I am saving for just the right quilt. Yours is lovely! (And has given me an idea...)

Beautiful quilt - and here's hoping three is your lucky number this week.

Beautiful quilt! Which reminds me I have a few quilts that need to be finished.

Gorgeous quilt -and I love the tail on Gizmo!

Major pain when those kinds of things go wrong in a day... But good they can be fixed...hopefully. 8-)

The Haiti happenings are indeed terrible... Most of them suffer enough without a catastrophe like this happening...