Three in one day? wow lol!

I have to share what happened today. Today was the fourth week back to school since the Christmas holidays. Every Monday since, we have had one kid home sick. I wasn't feeling well last night so I had decided to stay home today and just relax.

I had just gotten home from dropping off B and M when I got an email from M's teacher. She was outside when B hopped over a chain blocking the pathway and he tripped. He ended up falling face first into the pavement.

Surprisingly he wasn't bleeding but his lip was swelling pretty good. She gave him an ice pack and than sent me an email letting me know.

I was just replying to her when the phone rang. It was B wanting to come home because he hurt. So back to school I went.

The office seemed surprised to see me; B was back in his class but I wanted to check on him just in case. I thought with him back in class, maybe he was okay.

I get to his classroom and his teacher was so happy to see me. She's going on how he needs to see a dentist right away; that she had sent him out to look for the missing part of his tooth but he couldn't find it. Um, what am I missing? 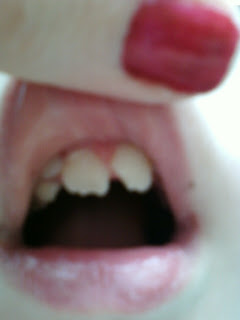 The picture doesn't show how bad it was( I really should have grabbed my camera and not just my cell phone lol) The split/crack actually went almost up to his gum. And of course our dentist isn't open Mondays. Thankfully he is apart of a larger dental office and we were able to get into another dentist as soon as we could get there. I raced home and grabbed Jim and off we went.

After some xrays, they applied some freezing gel(that B promptly said tasted like slug lol) and we started waiting. Every once in awhile the hygenist would come and see how much feeling he had left. Than it was time for this. 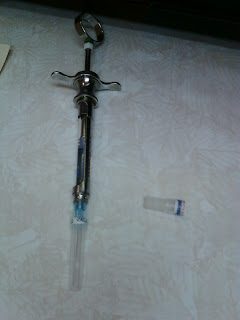 Now I DO NOT do needles. Needles and blood are pretty much on the same level for me. I had all but one of my baby teeth pulled when I was a kid; I know how much these needles hurt!

The dentist had that needle in and out so quick! I told B when the dentist finished that he had just had a big needle in his mouth. He didn't believe me until I showed him. The look on his face when he saw how big it was; priceless lol!

Freezing kicked in pretty quick and we were literally out of there in under 15 minutes after that and home by 11:30.

The dentist is fairly confident that there wasn't any nerve damage and that the tooth shouldn't die. Fingers crossed.

Here's a really bad picture of the *new* tooth. B was pretty excited that he got to spend the day at home and not at school lol. And Jim and I are pretty excited for extended dental coverage! 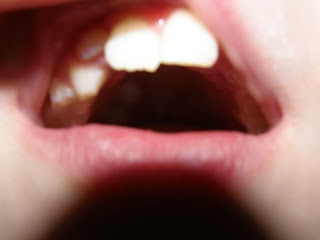 Bless his heart. Sounds like he handled the dental work well. That can be frightening even for us big kids.

I'm so glad this all worked out. I am sure that was a scarey day for all!
This same thing happened to my son. (while he was messing around in the swimming pool--could have been totally prevented--crazy boy!)Same tooth and everything. He has had his little fake bit of tooth for about 10 years now and all is well. So, go ahead and take a deep breath. :)
Take care-
Jo-Anne

wow...glad it wasn't too bad! Poor guy...I guess he'll be taking it easy for awhile...you hope!