In the spring, a friend approached me about quilting a quilt. She asked the cost and I gave her a ballpark figure. A few months went by and she asked again about the quilt. That's when I discovered she wanted me to MAKE a quilt, not just quilt it. That was a whole new ballgame.

I decided I could still do the quilt for what I had originally quoted her. When I've made quilts for friends in the past, I usually don't charge much more than the cost of materials etc and in this case, I thought I would make out okay since she had asked to have the quilt made in Twilight colors; red, white and black.

She wanted a picture of Edward in the center of the quilt. I thought the easiest way to do that was to get a t-shirt with his picture on it. She bought that and than I soon realized that the color scheme we had decided on would simply not work with the t-shirt. So the fabric hunt was on.

Sadly, this was when my friend told me she couldn't pay what we had agreed on; I was less than happy and as a result, the quilt sat unmade on my table for weeks.

This past weekend, I decided enough was enough and put the quilt together. Because of the limited budget, I was stuck on how creative I could get with the quilt. I decided to do a log cabin style around the t-shirt in the middle. For each border, the sizes would be different(top/bottom borders one size, sides another).

I interfaced the back of the t-shirt and started cutting. 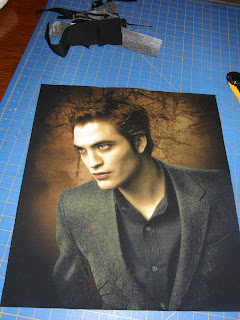 I started with a 2inch black border around the t-shirt; I love how it frames it! 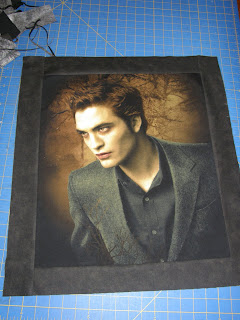 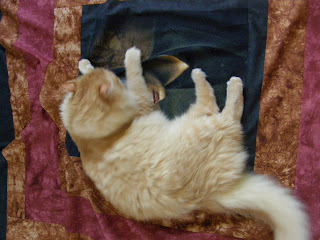 No Gizmo, it is not for you! 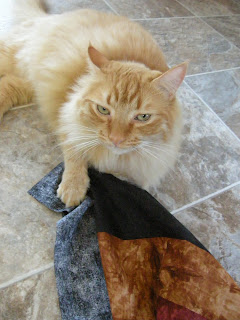 I quilted it up yesterday and of course I used the Twilight panto! 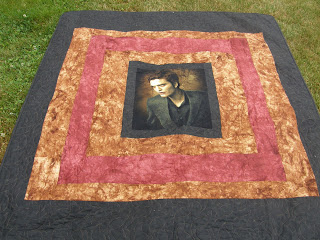 I'm not 100% with how it turned out. I really lost money on this which makes me sad; I do feel like my friend took advantage of me(and yes, she knows I feel this way). I do feel that I did the best that I could with the limited budget that I was given.

Plus we kicked your butt into gear on Saturday to get it going...... :P

It looks great. If she doesn't want it I know somebody will..... CoughmeCough.

It turned out beautifully! Too bad about the misunderstanding with your friend though.

Quilty, my friend, you did a really amazing job with this. I'm really sorry that you got the short end of the stick in this deal. People often don't understand what is involved in making a quilt. Anyway AMAZING! I would love it if you linked up at the Twilight Quilter's Coven again (http://twilightquilterscoven.blogspot.com/2010/04/letter-to-editor.html).

On a different note, I wonder how Robert Pattinson feels having his imaged plasterd about throughout the Fandom in all sorts of amazing and crazy ways. He's so nice to look at.

I really like the colors you added to the sides. I would have never been able to come up with that! Too bad your friendship was hurt.

P.S. Thanks for adding my button to your sidebar!

What a great idea! I'll have to go t-shirt shopping. We all have friends and relatives that don't have a clue about the time and money that goes into our quilts. We make it look so easy.

This quilt is so beautiful! That Edward photo in the center is marvelous and the framing around it really sets it off. It is neat, too, that you used the Twilight pattern to quilt it! It fits well with the theme! Nicely done!

P.S. Thank you SO MUCH for putting our Eclipse quilt button on your sidebar!