an original. i think

I have a very large snowman collection. So large that once the Christmas decorations go away, the snowman come out for January. I did some furniture re-arranging before Christmas and as a result, ended up with an empty space on the wall. A big empty space. 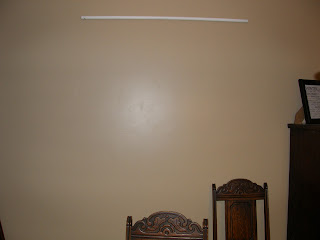 Well, that just won't do! I spent some time going through some quilting magazines to see if I could find something that I could whip up quickly and get on the wall and nothing. Than I had an idea of something. I started pulling some scraps and began cutting. And in the end, I ended up with nothing close to what I had originally planned(isn't that always the way? lol). 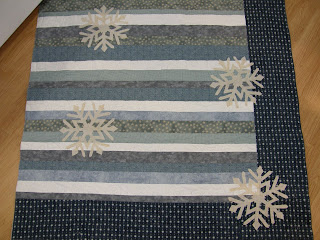 It's not very big, about 45 by 50ish. The snowflakes are what I was supposed to put on Mom's Christmas present.

I couldn't be happier with it. So simple; just randomly sized strips sewn together. I than measured the wall space and decided how big the border should be and cut the strips shorter. I love the borders on just the two sides. I just have to decide now if I want to bind it in white of the snowflake border print; I'm leaning toward the print as I am simply in love with it.

This is also my first quiltie finish of 2012. I would say I'm off to a pretty good start.
Posted by QuiltNut Creations on 1/06/2012 04:19:00 PM
Email ThisBlogThis!Share to TwitterShare to FacebookShare to Pinterest
Labels: quilting

Great job! Very Cool and wintery for a nice backdrop for your snowmen:)

Great idea! I have been shopping for more snowmen and snow related decor items since the house looks pretty boring between New Year's and Valentine's Day. I really like that you were able to use those snowflakes that you decided against putting on your mom's quilt.

Congratulations for the first finish of 2012! Are the snowflakes wool or cotton? Did you fuse them on or? I love this!

That is so pretty!